Brodie told me yesterday (in the 12:30 to 3pm window of interruptions) that he rejects the idea of a “new normal.” I get that. I want life as we knew it to return, too. And it will. Sort of, and eventually. And because, as Father Michael Dangelo reminds us twice daily and on Sundays that “this will pass,” I wanted to capture a typical pandemic day in the Life of Lees. Teenage boys are wrapping up a year of high school. Hero is still a puppy. Bernie is WFH. And I’m doing All of the Things. My guess is most of you (especially the mommas) could white-board a similar schedule.

9:30 – 10:30am Listen to Morning Prayer while walking Hero all over the neighborhood

10:40am At least one boy wants 2nd breakfast

11:20am Snackish children emerge from rooms for lunch, but it’s too early for lunch for everyone but the puppy

12:30 – 3pm Interruptions for political commentary of the day from Brodie, chitchat with Bernie, query from shirtless Teddy about his “gains” from a slightly altered workout, conversations with various contractors/painters/vet all while trying to OMG ANSWER JUST ONE EMAIL

4:30pm We have decided it is no longer too early for cocktails. We listen to Evening Prayer and walk Hero all over the neighborhood to give the ghosts a break so they don’t start planning retaliation hauntings.

5:30pm Start preparing dinner during which the boys wander in and out looking for pre-dinner snack offerings and play with Hero for maybe 3 minutes and 45 seconds even though this is the only time of day he really needs lots of attention and the only time I ask them to watch the PUPPY THEY WANTED

6pm Dinner is ready. Not everyone else is. They eat anyway, because they are constantly starving anyway and also are good like this and will sit down right away and eat up every last bite while making yummy sounds and I just adore them. Bernie sneaks Hero little morsels even though the puppy eats like the princely puppy he is and already had his supper.

7pm Hero has the “zoomies” and cannot decide if he should be inside or outside or doing crazy figure 8 races around the furniture, so he does all of these. More barking at ghosts.

8pm What day is it? If Thursday, Friday, or Saturday, we’ll probably continue cocktail hour. Scroll on demand channels for 27 minutes, realize neither of us wants to watch the same thing, so we watch something meh that is too girly, too violent, or puts both of us to sleep.

10pm Hero is a sleepy puppy and does the cutest slow walk to his crate. The tell tale puppy plop signals bedtime for everyone except teenage boys who suddenly appear for dessert.

11pm – ??? Teenage boys are doing Internet things that might be for school, but who are we kidding. Only the ghosts know.

As we enter our 4th week of puppy parenting/training/love-struck ownership, I realize we have become those people. Doggie treat dust lines all of our jacket pockets. Bernie and I share Hero’s new tricks with excitement equivalent to Teddy’s first swim without the Styrofoam floatie.

Have you seen him FAKE PEE for a treat? IS THERE ANY DOG SMARTER OR CUTER.

I already have a catalog of doggie ditties that accompany mundane tasks, and start each new day singing, “Good Morning, Mr. Wiggles.” I have a dog with an Instagram (@miniberniedoodlelee).

To anyone who asks (bless you, fellow dog nutters), I will gush about how thoroughly unprepared I was for living with a puppy. And it has nothing to do with poop, and everything to do with love. We’re all just happier. There are teeny teeth marks on stairs and coffee tables, and we don’t care. Stuff is just stuff. Things on the calendar we’re not looking forward to? Cancel. Hero is taking a nap? Might as well shut my eyes for a spell. I take 26 walks around the yard and neighborhood every day. IN JANUARY. Vitamin D mixed with puppy magic is making dark days of winter so much brighter.

Mere months ago I was an eye-rolling jerk-face when lovely people got all mushy about their pets and now I routinely baby-talk rhetorical questions to a small fur ball. “Who’s the cutest doggie in the world? Hero, Hero, HERO!” (That one is also in the puppy playlist of made up songs.) Last weekend because Hero was napping and we missed him, Bernie and I scrolled through other Bernedoodle Instagram accounts to predict how big our best boy will become. When I hear, “Mom, mom, mom, LOOK!” 138 times a day, it’s no longer a 2nd grader with a Lego creation. Now it’s a teenager who doesn’t want me to miss Hero sleeping with his favorite duckie toy or sneezing for the first time (which frankly, puts the cute-o-meter on tilt).

Hero came with me to Bible Study today. Though I was worried he’d christen the Old Parish House with excrement, he only greeted a dozen Christian women with unbridled enthusiasm—hi hi hi hi love me pet me love me– and then fell asleep in my arms. Alyson called him “furry blood pressure medicine.” But the quote of the day was from Father Mike: “Puppies make you realize that Love is not a zero sum game” and then assured me that it didn’t matter if Hero punctuated the Gospel of John with puppy piddle. Pretty sure Lees (and now Hero!) belong to a Church full of… those people.

The decade has seen us weather the toddler to teen years, from kindergarten to high school. Facebook memories from 2009 portray an exhausted mom who yearned for adult conversation and bubbly. A fairly big chunk of the 2010s included diagnosis, treatment, recovery, and the never-ending aftermath of breast cancer. The past few years, Lees agonized over standardized testing, essay writing, and the sleep-depriving anxiety that accompanies high school admissions. Stevie navigated divorce, dating, neuropathy, migraines, college application stress for three children, and got cancer. More recently (because God is good) he’s experienced the miracle of new love and marriage. Steve wrote about all of these moments candidly and with humor. More often, I just complained about cardio. Our shared bloggy pursuits even went viral twice this decade. As 2020 begins, there is more good than awful in the accounting, but we’ll take “boring” for the next 10 years, please.

Boring, it won’t be. In the dark days surrounding the solstice, the Lees felt keenly bereft of joy. The stress of the holidays piggybacking onto an overly long and expensive home renovation project and three (minor, but still) car accidents and midterm exams plus a brief but serious consideration of a new job and move was enough already. Taking a hard look at all of the hard work all of us were doing—board meetings, conference calls, Latin declensions, concussions and cross country meets, fundraising, editing, international meetings, and too much travel that did not include umbrella drinks– we realized there wasn’t a lot of FUN happening. And so in what appears like the Lee Family’s Most Impulsive Move, we got a dog.

After years of insisting that I “am allergic” and “refuse to pick up poop” and “will never budge,” we got a puppy. A tiny, sort of hypoallergenic (y’all are really overselling this notion), absolutely adorable mini Bernedoodle is sleeping at my feet right now. Is this just more work? Maybe. But with teenagers doing the lion’s share of puppy play and taking the night shift, so far it seems like we adopted a big dose of joy in the softest, cutest, littlest package. And Hero is his name.

My boys went back to school today. On the 2nd, because their school is totally finger horns metal when it comes to the calendar. When Brodie brought a whimpering puppy to me at 4:30am, asking me sweetly to take over, I did this happily… but I’m still drinking coffee in jammies and have been up for FIVE HOURS. Am I counting the minutes until they get home? Maybe. Is Hero checking couches for napping humans because so far that’s all he’s seen us do? Yup. But those of you who are likening this stage to having another baby never experienced Brodie as a baby. This is hardly the lonely and exhausting time suck that was stay at home parenting with a newborn. And I could probably take Hero with me to get a pedicure. Perspective.

It was thought- and conversation-provoking timing to get a tiny new family member as the decade closed on such a huge portion of my boys’ lives. Will it be so sad to leave Hero when they go to college? Will Hero be alive when they get married? What will life look and be like in 2030? For the first time since my boys began high school, and now a handful of their friends started college visits and dove deep into application stress, we’re looking at the future with more what if/what’s next optimism. As my boys focus less on have-to’s and more on could-be’s, Bernie and I are clearing the calendar of stuff that doesn’t really need to be on it. We have a sleepy, fun, soft, love me love me love me puppy to Instagram. Together. And that makes him a Hero, indeed. 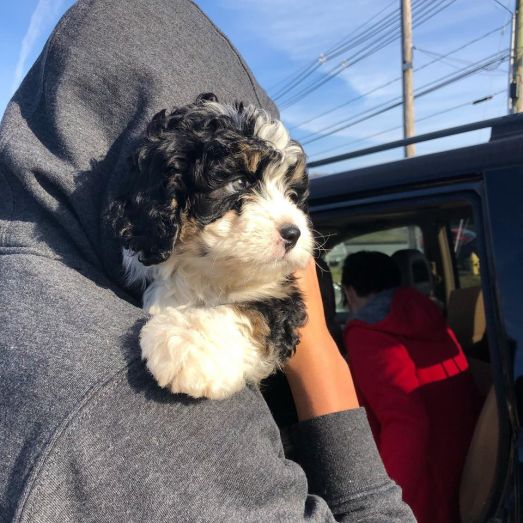 Please note my utter RESTRAINT in only posting one puppy pic