The first time I ordered a beef tenderloin, I was interrogated by the butcher.

“Do you know how to prepare this?” he asked, reluctant to pass me the paper package over the case of hacked up cows.

“Sure do,” I countered, totally unsure, but aware of Google.

“How are you going to cook it?” he asked, really rather impertinently for someone wearing white pajamas and a name tag.

No, I didn’t say that. There isn’t a single grown up on the planet I can respond to with such cheek. I threw Ina Garten’s foolproof 500° for 25 minutes at him and he handed over $100 worth of beef. But to be honest, it’s really easy to overcook a tenderloin, and it was sort of adorable that the butcher didn’t want to sell this choice cut to an inexperienced girl.

Last night, as I unwrapped my dozenth, holiday-inspired, expensive cut of meat, I wondered if I could write a food bloggy post. Now that I know how to not botch a tenderloin, maybe I could fashion a little step-by-step? Zibby does this with apparent ease, Instagramming her charming little projects and making a messy assortment of plant material or crafty things look like freakin’ art. I could do that… right? Wrong.

Dinner was delicious. But you’ll have to take my word for it.

My first photo of the five-pound tenderloin looked like this. I wanted to demonstrate its expert twining, and the slapped-on salty, garlicky, rosemary crust. Instead… Meat Penis. Subsequent photos of the phallic dinner will be snapped sideways.

Every girl who knows her way around a giant meat penis gives it a good sear to lock in those tenderloin-y juices. Five pounds of beef is an unwieldy partner for a pan, so I brown huge meats on the grill. Cheating? Maybe. But it works like a charm and spares the stovetop splatters. (I am my mother’s daughter, and abhor splatters.) After four minutes on four sides, my seared meat penis was ready for a bit of pornography. 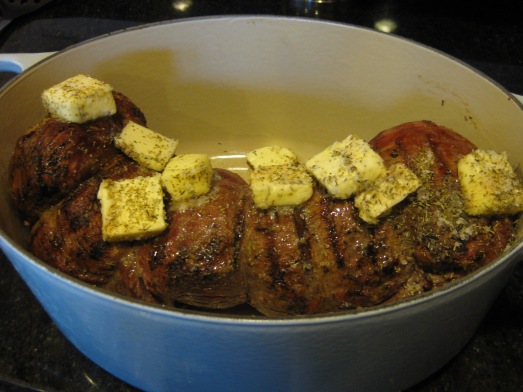 Yup. I took a delicious beef dinner and made it even better with butter. Not everyone would slather her already decadently yummy meat penis with herb-y butter, but not everyone would continue to call it a meat penis. Now it was time to get this baby into the oven. Ina puts hers in at 500°, but I find if I go past 475°, the kitchen fills with smoke and gives all appearances that I have no idea what I’m doing, when I clearly do because Le Creuset. I wedged my meat penis into Le Creuset to spare the oven splatters, and also so I could take pictures of my Le Creuset and keep typing Le Creuset. Le Creuset. Although anyone can own gorgeous cookware, I’m truly whirly dervish-y in the kitchen and whip up these sides so they’re all finished at the same time as meat penis… and the entire fancy dinner is on the table in 45 minutes. 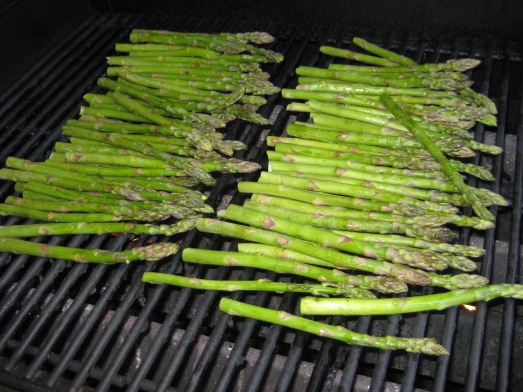 Don’t these look even more delicious because I shot them on an angle?

If you’re like me, and married to an Asian man with small Asian clone children, and almost always an assortment of other Asian houseguests or passers-by, then you need this, too. When a meal already includes potatos and crusty bread, one would think rice wouldn’t be necessary. But if there’s no rice, I’ll be asked, “Is there rice?” And this happens all of the time, all of the time, all of the time, so although this step is optional for most of you, for me, it’s not.

Just as I was feeling all boss, my trusty meat thermometer indicated that dinner was internally 160° after only 15 minutes. It wasn’t. I don’t know what “filters” you geniuses are using, but I couldn’t take a single picture to demonstrate the rawness of meat penis after 15 minutes. It went back in for a total of 30 to get more medium than rare which is the way we like it. And here it is… smelling all sorts of rosemary delicious, but looking like ordinary meat because I don’t understand Instagram.

If this were a real food blog, here’s where I’d include a picture of me looking adorable in front of a lavishly set table with my yummy foods displayed on matchy platters. But at this point, I was already half way through this and I totally forgot to selfie.