Somewhere in my mid-twenties, a handful of years into graduate schooling, with a series of rotating apartments and a persistently ring-less finger, my dad and his best friend, Lynn, began referring to my boyfriends as “Roadkill.” I wasn’t particularly promiscuous, but inching up on 30, the sheer numbers of boys who would never be my husband got, well… numerous. More often than not, I was the one who was bored, disillusioned, or unfaithful (sorry, boys) and the one to call it quits. Thus, Roadkill.

Ty was my neighbor and probably one of my closest buddies during senior year of high school. He will always be one of the funniest people I have ever known. Carpooling to school through rural neighborhoods we once saw a horse do a yawn-whinny thing that we imitated often and at impromptu times. It was only hilarious to the two of us. “Are you cereal?” he’d ask. “Not nece-celery,” was the answer. He loved The Grateful Dead, so my Julie Andrews covers were deliciously irritating (to him) and entertaining (to me): Roooolll A-Wheyyyy the Doooo! Do you have that one friend who makes you laugh at nothing—a Jerry Seinfeld with a Pez dispenser? That was Ty for me.

Ty and I spent many bellyaching, laughing-too-hard-to-breathe nights together. Chastely. We were truly just friends. But you can imagine how well Ty went over with The Roadkill. One summer night I brought a new boy home. Ty was over for dinner, which was common. Wine was flowing, which was really common. And everyone was making fun of each other, which is in the Stockton Family Syllabus. Future Roadkill misread the room– or was too thin skinned– and got a little territorial about being the boyfriend (with its implied set of privileges) instead of the friend. Ty didn’t miss a beat.

“Whatever, dude. Next year Britt will be with some other guy, but I’ll still… be… right… here.”

Roadkill was the only one who didn’t find this funny. He didn’t last very long. The next one did, but even he ended up smeared all over the grille. Those were Lynn’s words as he and Judy poured me the tallest and tastiest vodka tonic I’ve ever had, and listened to my latest misadventures in love. After that break up, I drove 7 hours to see them, their daughter, and to languish ring-less-ly on the deck of their gorgeous beach house… and to laugh.

Thinking about Valentine’s Day, these memories shifted to the top of my mind like the big popcorn pieces when you shake the bucket. Suddenly I’m aware of Great Loves in my life who never gave me flowers or chocolates or rings, but made me pee-a-little giggle and poured me gigantic cocktails as I plowed through the dating years that led me to the best one. 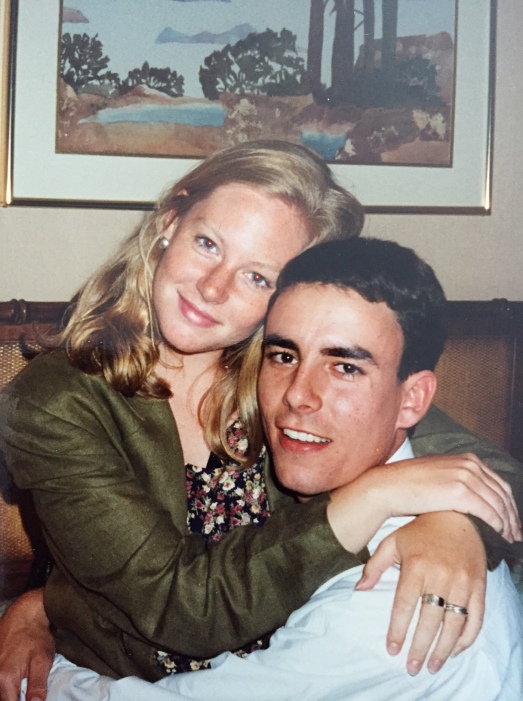 Ty and me on my 21st birthday. Can’t imagine why all the Roadkill hated him.