December. This is a notable month for me and Britt. It was two years ago that we shared our respective big news, albeit on markedly different fronts. I moved out of my home, in the first step toward a divorce. Upstaging me considerably on the Oh Crap meter, Britt told us, her friends, that she had breast cancer.

It took years to work up to a divorce. Britt stole all my thunder with one mammogram. I have yet to forgive her fully.

So, for both of us, December 2013 marks the second anniversary of our reorganizations. Britt’s changes involved an unplanned physical assault on her body and peace of mind, a year’s worth of rotating relatives, hair loss, hair growth, and a blog. My reorg was self-imposed, required the packing and unpacking of many boxes, job changes, post-marital dating (and a blog). Within a span of three months, I’d lived in three different locations, finally settling into an apartment near Nordstrom’s. I hardly expected that years of domestic disharmony would lead to the mall. But for me, Black Friday simply means I can’t get out of my driveway.

The second part of my reorg was my mental health. I had suffered years of depression and anxiety. Although I have regulated the depression, the anxiety remains. I suspect it always will. A visit a couple of years back to Dr. Drug Dispenser yielded this diagnosis: “You’re fucked.” Not kidding. Direct quote. Let it be noted that I, like Britt, do not approve of candy-coated health information. “Fucked” was an excellent diagnosis, accurate and pithy.

In what now seems an absurdity, one year into my reorg in December 2012, I became a producer on a series for the Discovery Channel called “Amish Mafia.” The highly rated “reality” show was a lot of fun. The pay was good and the hours, though long, were tolerable. But the commute blew. It meant weekly trips to New York City, coming back to Natick on weekends to cram in a week’s worth of quality time with the kids. And the awesome paycheck was largely wasted on overpriced New York sublets. After two seasons, I’d had enough, and announced The Amish would have to keep being Amish without my guidance.

Reorganization needs support, and I had plenty. My family and friends were there. Last December, when I was at a particularly low point, I arranged a “grownups cocktail hour” over here above the mall so I could spend an evening drinking and laughing and reminiscing with Britt and our other college cronies. When reorganization leaves you feeling adrift and lonely, seeing old friends in their holiday finest and reminding you that you are loved and occasionally funny… well, that helps.

You know what else helps? Fate. Luck. Love. Britt would call it the Holy Spirit (and there she goes, wielding her editorial power), but I wouldn’t. This December also marks a year since my first date with a woman I met on Match.com. She billed herself as “Agent 99” and, as I am a huge “Get Smart” fan, drew my attention immediately. After a few exhanges, 99 and I took our virtual relationship into a nice restaurant. I met this smart and funny and pretty woman. I also love the fact that she found a typo in my Match.com bio describing myself as an annoyingly fastidious writer. My life turned on a typo, unearthed by Agent 99.

This December, I don’t have a job and Britt has chin-length hair. Our reorganization continues. But as the pair of us head into another holiday season that evokes all sorts of bad memories, an intervening year creating better ones makes it all seem like there are many reasons for drinks to be poured. And next week is the second annual Grownups Cocktail Hour. 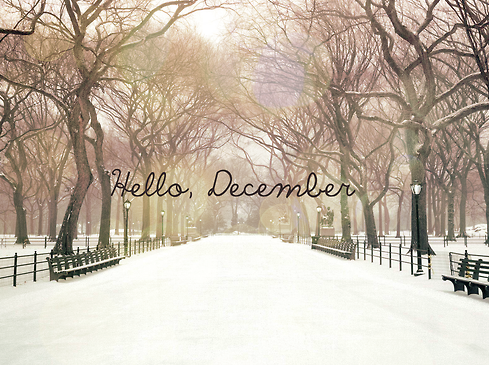