Personally, I love Stevie when he’s in a mood. And maybe we should all take a beat before we get all huffy or encourage our friends to re-post dreck on the Internet.

Hi. We need to chat for a moment, because we have a problem you and I. We need to believe in a lot of stuff that isn’t real. We are being asked to pay attention to and prioritize stuff that we don’t actually have to worry about. We are required, and possibly really need, to believe in bullshit.

And what a season of bullshit it has been! Just look at what we’ve had to pretend is important lately. We’ve weighed in on our right to recline our airplane seats. We have to express an opinion on whether a gay football player will bring down sports altogether. We have to opine on how you give to charity: ice bucket drenching may earn you accolades or derision depending on your audience. The fact that you actually are donating isn’t really our focus any more.

Me, I’m a bit exhausted from all of the pretending to care.

These days, we’re asked to show our support or share our outrage about something every goddamn minute. I’m not being hyperbolic, either. Thanks to Upworthy, Buzzfeed and other clickbait sites, we need to repost or “like” cloying, misleading stories on Facebook, lest our friends think we’re total jerks. Remember the boy who cried wolf? Even the wolf is calling bullshit:

When I was 22 and not four weeks out of college, I landed a job at Disney Home Video Public Relations. In June of 1990, there was a serious plague of bullshit among Serious Parents. It was as follows: on the cover of the video for “The Little Mermaid” there appeared to be a castle spire that was a little more phallic than the rest.

Yep. Freud would have seen it, too.

But where you and I would have chuckled and made some immature joke about tower envy, The Serious People wrote to Disney. Because… well… penises. And outrage. And whatever.

The people at Disney took the matter seriously. They decided immediately to do two things: 1. Change the artwork and 2. Give all the complaints to me. So it was, in the summer of 1990 that I found myself receiving all of the mail addressed to the heads of Disney. They were forwarded to my new desk so I could answer each one personally. I still have the interoffice envelopes (yes, kids… interoffice envelopes, we’ll wait while you google it) that read as follows: MICHAEL EISNER / JEFFREY KATZENBERG / STEVE SAFRAN.

As a new college graduate, my delight was immeasurable. Or so I thought. Because as funny as all of this was, my next task answering the mail of the higher ups reached paranormal levels of absurd.

People, it seemed, thought they were seeing a ghost. That is, they thought they saw a ghost in a scene in “Three Men and a Baby.” An urban myth quickly materialized about the ghost of a boy who died in the apartment where the scene was shot and WHO GIVES A SHIT I CAN’T EVEN FINISH THIS SENTENCE… 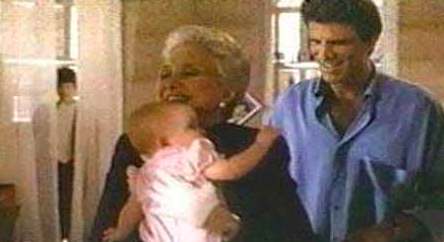 The “ghost” was actually a cardboard cutout standee for Ted Danson’s character. It was positioned low in the frame and the scene goes by faster than you could yell, “Norm!” So yes, if you blink, and you’re a gullible idiot, then you might be persuaded you saw… Hell, anything, I suppose.

Do most of us believe in ghosts? I don’t. But I think we can all agree that they are unlikely to reveal their otherworldly presence briefly through a Steve Gutenberg vehicle.

Outrageously, my job was to write back to the ghost believers. They replied to me, in turn, accusing me of a sordid Disney cover-up. And their belief in this bullshit sent them to their desks to craft paragraphs and find stamps—a whole process that took much, much longer than a re-blog or share. In 1990, you had to commit.

I never thought that, in retrospect, I’d respect those people for their commitment to the complaint, or for their pen-and-ink belief in anything. But outrage is so easy now. We can submit our bullshit from our phones. We can apply some sort of app to float our complaints and harrumphs. Of course, there are apps to answer those, too. So, really, we can be indignant with each other now and never have to exchange an un-virtual word. Convenient.

I realize I can’t stop this problem we have. I love gossip and I’m not above it. On the contrary– I was on the morning news for seven years, reporting it gleefully with my usual tagline: “Don’t pretend you don’t care.” But I never believed it was all A Big Deal. Today, I worry that all of our pretend caring and overblown outrage has made the line between opinion and journalism blurry. The news shouldn’t be about bullshit.

And with all that’s going on in the world… it should make you bullshit instead.