Nicole was my bosom-est buddy and roomie for a handful of graduate school years. We became close only at the tail end of college when, maybe, she decided to brave my off-putting seriousness or nerdiness-charading-as-snobbery and finally talk to me. (Apart from my true blue writer and musical theater friends, college was a lonely time.) Most stories worth reading describe a Nicole: exciting, interesting and interested, funny, whip smart, and crazy sexy. When I think about us in our 20s, I remember her as… bursting. Her easy confidence with boys was a tactile one, and I saw her literally nibble on a few who found that experience titillating. Even her nervous energy manifested as adorable hilarity. An utterly irresistible Italian girl, Nicole was all hair and curves and hugs and pinches. Ultimately, this untamable juggernaut of charisma and beauty settled down with the only boy smart and lucky enough to interest her for the next two decades.

But there were many years of dating that occurred between the moment she spotted him and the dramatic presentation of rings and promises, and what I remember fondly and vividly is Halloween. There were plenty of beer-ponging costume parties scattered around our Boston neighborhoods and hosted in our crappy apartments, and a few quite famous soirees with our very, very RISD artsy friends in Providence. The idea that we planned elaborate outfits and drove hours to attend a one-night-only party is unfathomable until I remember once upon a time we had zero children and an entire weekend to nurse a hangover. Carla and her then boyfriend once arrived from NYC as tin toys; and the next year after they had eloped, returned to the same party as mullet groom and pregnant bride. Everyone (but me) was extremely creative and delightful.

This was the ‘90s. Naturally, I dressed as Britney Spears because I could rock that look, and also because I already owned some version of a Catholic schoolgirl uniform that I wore every day until grunge took hold. I bet I could still find a plaid miniskirt in my closet. Another year I borrowed Nicole’s extreme cleavage dress with the silver fishtail silhouette, attached seashells to the busty velvet bodice with sticky tape, and was Sexy Mermaid. (The fact that I hadn’t asked Nicole if I could do that was testament to our friendship, or her inability to stay angry with me.) I don’t remember other clichéd costumes I cobbled together, though I’m sure they were all designed around wearing more makeup than usual and trying to look cuter than usual. It wasn’t until after I married Bernie that I was pulled out of my vanity rut and we went as Jay and Silent Bob. As I said, it was the nineties. 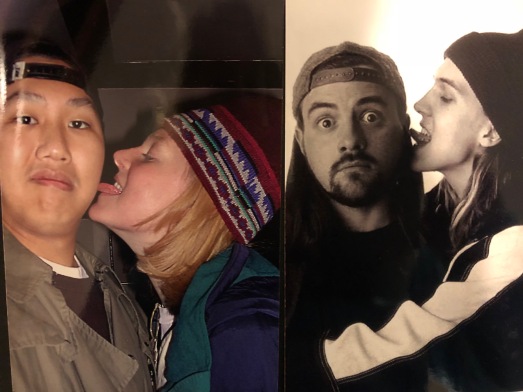 Already a favorite among my oldest friends and wildly popular with my newer acquaintances in medical school, Nicole attended many of these monster mash-up parties with her future husband. One time, she was The Karate Kid with authentic competition garb. Sexy Daniel-san, this was not. Another time, as arguably the coolest girl at the party, and likely the spiciest gal in three towns, Nicole dressed up as Jimmy Buffet: hairy prosthetic belly protruding out of a horrible Hawaiian shirt, shaggy beard, bird perched on her shoulder… god, did she have a cheeseburger? This was no Sexy Parrothead costume. I’ll never forget giggling with her date over his half-lamentations regarding costumes that included more body hair than he had. Maybe next year, she wouldn’t dress up as a dude? I think we both kind of loved that she didn’t want to sex up her Halloween costume, preferring to be kind of gross or funny instead. Only a girl with that much confidence chooses not to be cute for Halloween.

(She was totally cute as Daniel-san.)

I wonder if Nicole is still pulling these punches and adding realistic, rubbery warts to her Witch Crone getup. I wonder if her adorable daughter has inherited this trait and has made plans to be Groot or Morty or Post Malone instead of Wonder Woman or Cardi B. Truth be told, that year dressing as Jay to Bernie’s Silent Bob was the most physically comfortable I’ve ever been at a party. As Cher ruminated famously, “… party clothes are so binding.”

This past weekend was spent strolling down memory lane with my parents as they celebrated 50 years of marriage. Nicole’s name came up a few times, as you can imagine (see description, paragraph 1). And in that spirit of nostalgia, enjoy these ridiculous pictures of other, completely un-sexy Halloween outfits. Yes, that is I, an inexplicably pregnant 7 year old (wtf), an elementary school “scullery maid” (hand to heart, that is what mom called this), Frenchman (why), and a good Do Bee!

SHOW ME YOUR UNSEXY COSTUMES.