I want to tell you a little bit about working in local news.

It’s messy and complicated. It’s filled with drudgery. It’s overnights for years without recognition. It’s reporters who start in small markets with pay so low they take a second job, usually as a waiter or waitress. Pilots describe their job as “Hours of boredom with moments of terror.” There’s not a lot of terror in news.

My friends in local news work their asses off to tell stories that affect people’s lives. They are lumped in with “the media,” so often used these days as an insult. But “the media” is people: normal people (mostly). People at work the same way you work. Working in news is just like working in any company.

Except when you get something wrong.

I do not for a moment defend the inaccurate reporting that went on Wednesday. That was terrible journalism. That was rumor-mongering. That was the absence of the rule to have at least two sources. The oft-quoted saying in journalism is “If your mother says she loves you, get a second source.” News let us down Wednesday.

But, for the most part, that was the national news. What inaccuracies were reported locally were sourced, as in “According to the AP…” That’s not an excuse. That’s how it works. And how it doesn’t. My friend Cory Bergman at BreakingNews.com had a perfect tweet midday Wednesday as the networks were pulling back from the report that a bomber was arrested. Cory’s site was not reporting any such arrest. And Cory tweeted “And that’s why Breaking News is still waiting.”

Local journalism can be silly. We’ve all seen those “WILL THIS THING KILL YOUR CHILDREN? TUNE IN AT 11!” teases.

But it can also rise to the occasion. On 9/11, NECN was on the air for 60 hours straight. Tom Melville, the Assistant News Director anchored overnight. Everyone pitched in. NECN News Director (and now GM at WBUR – an example of excellence in reporting) Charlie Kravetz gave cool-headed direction and insisted upon accuracy. We held off until we knew.

On Monday, as the bombs went off at the Marathon Finish Line, I am quite certain the instinct would have been to run like hell. But the journalists stayed: people like Steve Silva of Boston.com, who was there simply shooting what he hoped were inspiring stories. As soon as the explosion hit, Steve ran to get more footage. That’s not sensationalism. That’s journalism. And, though he’ll shrug it off, that’s bravery.

My friends in local news tried to make sense of the chaos. Mike Nikitas at NECN anchored calmly and accurately. Kathy Curran of WCVB, there to report on the race, put on her local news hat and stood within yards of the explosion reporting. Producers and Assignment Editors in every newsroom – unheralded though they are – scrambled to keep things organized and on the air. The national anchors dropped in later. But the local newsies were there from the first second.

I worked in local news from 1992 – 2006, and continued to work with stations as a consultant right up to last month. 20 years of experience. I can tell you what I know for sure: the people who bring you the local news are, well, wicked awesome. 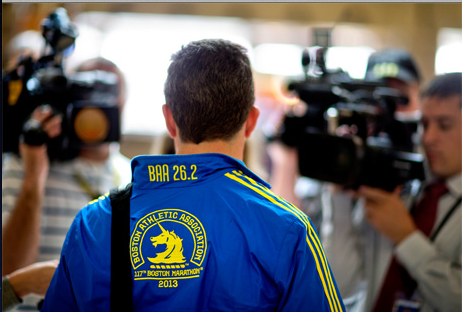