“You see Nazis everywhere!” an exasperated friend once told me in college. She had a point. I brought up Nazis a lot, usually joking, sometimes not. I was raised to fear the Nazis, even though they had lost a war more than 20 years before I was born. I had Nazi Nightmares. I would be sitting in my sixth grade class in Wayland, Mass., and the Nazis would come for me.

I was raised to “Never Forget,” starting with Hebrew School in fourth grade. I went to Jewish summer camps beginning in 1977. Even there, amid the summertime fun of swimming, singing and doing plays, we honored the holiday of Tisha B’Av, which commemorates the destruction of the First and Second Temples in Jerusalem. It’s the saddest day on the Jewish calendar. We honored it at summer camp.

I remember being picked up at one of those first days of Hebrew School and saying to Mom: “Did you know about the Holocaust?” Of course she did. Although she was a toddler, she was a child of the war, and my grandfather, a first generation American Jew, helped build the ships that took out the Third Reich.

As the years went by, the Nazis became a punchline. They weren’t vicious genocidal maniacs anymore. They became “Springtime for Hitler” goofballs. Even the word “Nazi” has been defanged. It’s become shorthand for “strict.” There’s the “Soup Nazi” from “Seinfeld.” If you’re a pedant for word usage, you’re a “grammar Nazi.” And there’s Godwin’s Law: “As an online discussion grows longer, the probability of a comparison involving Hitler approaches 1.” Or, the longer a thread, the more likely someone will call someone else a Nazi.

But Nazis are real, they’re not a joke, and there’s nothing funny about this group of young, mostly male, Hitler-worshippers who have come out from the shadows. They have always been there, but now feel emboldened to take to the streets and foment violence. They can call themselves the alt-right, but that’s just rebranding. They want anyone who isn’t a “White American” gone. Stop calling them the “alt-right.” They’re white supremacists. And if they march under a swastika, they’re Nazis.

I believe—and this is very difficult to type– that the Nazis had a minor victory in Charlottesville. Yes, I believe love and compassion will win. But they want anger and hate, and they got it. They could have had their sick little demonstration, screamed about how life isn’t fair for white guys in America, and dispersed with little notice. Instead, we are left with three people dead. Chaos, death, fear means a win for the Nazis.

I spend a little time reporting these people to Twitter. This breed of hate-mongers are in violation of Twitter’s rules regarding abusive behavior. I search for racists with the biggest following, and I report them. It works. They get shut down. Often they’ll have the audacity to call being kicked off Twitter as getting “Shoah-ed.” The “Shoah” is another word for The Holocaust. That’s right– these people compare losing access to a social media site to being tortured and slaughtered for their religious beliefs. They are even sicker than you know. And, of course, they jump right back on Twitter with a new account. But I take a little pleasure knowing I’ve made it a tiny bit more difficult for them to spread their hate.

You can take the same action. Search the racist words they use and you’ll find no shortage of terrifying accounts. (Seriously: Twitter? You can’t crack this nut?) Report these people. They need social media to organize and spread their hate. We can stop them together. They act like it doesn’t bother them, but it’s a small delight to watch a Twitter user with 8,000 followers pop up again and have 10. Then I report him again. It’s not exactly “Simon Wiesenthal, Nazi-Hunter,” territory, but it matters.

We can fight the Nazis together, on line. Today’s Nazis thrive on social media. Let’s cut off their supply. 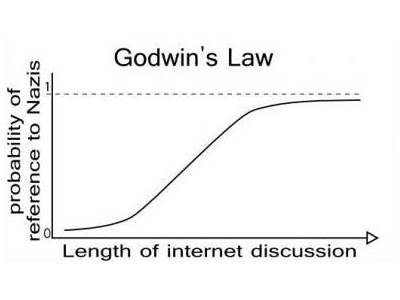 Maybe we can stop using “Nazi” as an umbrella term for those who do not agree with us… and save it for the actual ones in our midst.